Trump says shutdown could last for months or years 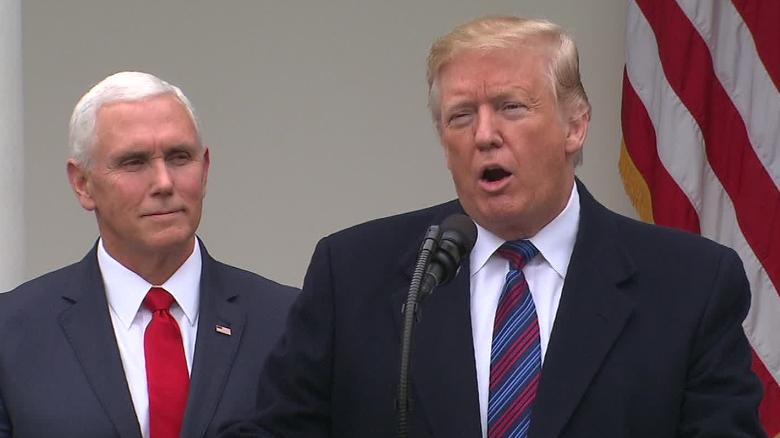 President Trump said he’s prepared for the partial government shutdown to last months or even years, after a meeting with top Republicans and Democrats that was followed by an hour-long press conference in the White House Rose Garden.

Mr. Trump told CBS News chief White House correspondent Major Garrett that he had said in the meeting that the shutdown could continue for over a year. Senate Minority Leader Chuck Schumer told reporters after the meeting that Mr. Trump “said he’d keep the government closed for a very long time, months or even years.”

“I did say that,” Mr. Trump said. “I don’t think it will but I am prepared.” However, Mr. Trump said that the meeting with congressional leaders was “contentious” but “productive.” Mr. Trump reiterated that he wants $5.6 billion for the wall, contradicting members of his own administration who offered Democrats a deal with $2.5 billion for the border wall last week.

“It was a great meeting. It may get solved, it may not get solved,” Mr. Trump said of the meeting.

Mr. Trump said he would consider undoing raises set for Pence and other top members in the administration while the shutdown continues, but didn’t agree to do so publicly.

When asked if he was still “proud” to own the shutdown, as he said in a meeting with congressional Democratic leaders on Dec. 11, Mr. Trump said that he didn’t call it a “shutdown,” but doing what was necessary to protect the country.

“I’m very proud of doing what I’m doing,” he said. He also reiterated his claim that money for the wall would come through revenues from the U.S.-Mexico-Canada Agreement, which has not yet been passed in Congress.

Mr. Trump said that he could call a national emergency and build the wall, but he has not done so yet.

Newly minted Speaker of the House Nancy Pelosi, Schumer, and top Republicans met in the White House Situation Room Friday morning for their second meeting of the week on the 14th day of the partial government shutdown, after they made no progress in a meeting Wednesday at the White House. Pelosi and Schumer spoke to reporters after the meeting, and indicated that the meeting was not a fruitful one.

Pelosi did not offer such a positive assessment of the meeting with Mr. Trump, saying that she and Schumer had insisted on the need to reopen the government.

“We are committed to keeping our border safe,” Pelosi said after the meeting. “We can do that best when government is open. We made that clear to the president.”

“We made a plea to the president once again: don’t hold hundreds of thousands of federal workers hostage,” Schumer said, adding that Mr. Trump has said that he would allow a shutdown for an extended period of time. “So we told the president we needed the government open. He resisted.”

It’s unclear where Republicans and Democrats may find a compromise.

Democrats want Mr. Trump to go along with funding the non-Department of Homeland Security agencies, but Mr. Trump told congressional leaders in the Wednesday meeting doing that would make him “look foolish,” according to a person familiar with the conversation.

On Friday morning, White House press secretary Sarah Sanders didn’t close off the possibility of trading protections for so-called “dreamers” in exchange for wall funding, but said she wouldn’t “negotiate” in the press.