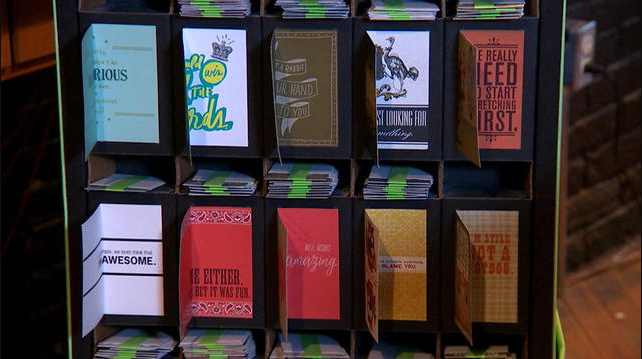 The greeting card industry may need a sympathy card given that sales continue to slide as Americans increasingly use social media to send their well wishes. And that cultural shift may soon be visible in stores with retail giants such as Walmart and CVS saying they’re rethinking how much floor space they devote to greeting cards.

Greeting card sales have declined by almost 3 percent during the past five years, with revenue expected to dip to $4 billion this year, according to market researcher IBISWorld. Many consumers who used to mail a birthday or holiday card to friends and family are instead now relying on social media, IBISWorld noted.

That’s causing some soul-searching among major retailers. Gregory Foran, CEO of Walmart’s U.S. division, said the size of the retail giant’s greeting card section is being reviewed as it remodels stores.

“We’re having a look at other areas of the box at the moment. Do we really need the amount of lineal footage that we’ve got in greeting cards?” Walmart’s Foran said at a conference earlier this month, according to a transcript of his comments published by Walmart. “And the answer is let’s do the work and have a look at it and see what that means.”

Meanwhile, CVS Pharmacy president Kevin Hourican, told USA Today that the drugstore chain is giving too much space to greeting cards, and plans to reduce their footprint in favor of more room for health care products. Walmart and CVS didn’t immediately respond to requests for comment.

“More and more people are using text and email and e-cards, and fewer people are buying cards,” Hourican told the publication.

Yet while the greeting card industry might appreciate a “Get Well” card, it’s not all doom and gloom for card makers such as closely held Hallmark and American Greetings. Perhaps surprisingly, millennials are the fastest growing group of card purchasers. Greeting cards with a snarky edge, as well as high-end cards that retail for more than $10, are increasingly popular with shoppers.