The federal minimum wage sets a record — for not rising

On Sunday, the federal minimum wage reached a new milestone: Since the administration of Franklin Delano Roosevelt introduced a national baseline pay after the Great Depression, it will have been nine years, 10 months and 23 days since Congress last increased it — a record. This decade of stagnation for low-income workers comes as the stock market soars and in an economy President Donald Trump has touted as the “best it’s ever been.”

Despite the recovery, millions of workers across 21 states remain subject to the federal minimum wage of $7.25 per hour, which was set in July 2009 when the U.S. was beginning to regain its footing from the Great Recession. 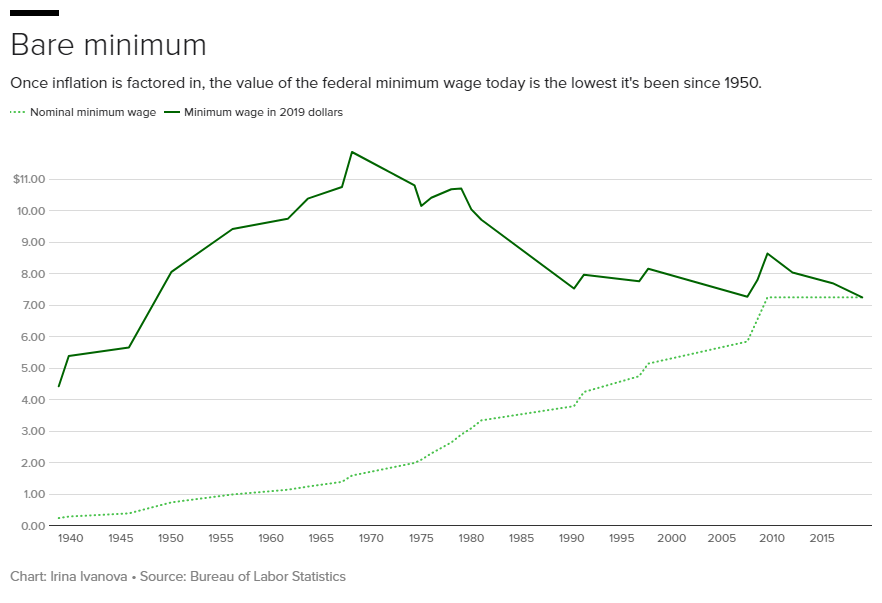 Even as the country has boomed, creating jobs and reducing the ranks of the unemployed, the economy has increasingly split between haves and have-nots. The richest Americans have prospered, enjoying outsize income gains, but the country’s poor and near-poor haven’t shared in those gains. That has made it harder for low-wage workers to keep up, especially because the cost of living has jumped 18% since the last minimum wage hike.

“The only thing I can focus on is my rent and to make sure I have money for groceries,” said Rita Blalock, a McDonald’s worker in Raleigh, North Carolina, where the federal minimum wage is in effect. She said she recently received a raise of 25 cents an hour to $8.50, her first raise in five years. “I may have $30 or $40 left over at the end of the month.”

Blalock, 54, said she started working at McDonald’s nine years ago for $8 an hour. But over that time, her costs have far exceeded her 50-cent pay increase. Gentrification pushed her out of her $400-per-month rooming house, which was close enough to her job that she could walk. She’s now paying $600 a month in rent and also needs bus fare to get to work.

“The Congress, the senators, everybody needs to get together, because they need to know people can’t really live on $7.25 or $8 an hour or anything like that,” she said. 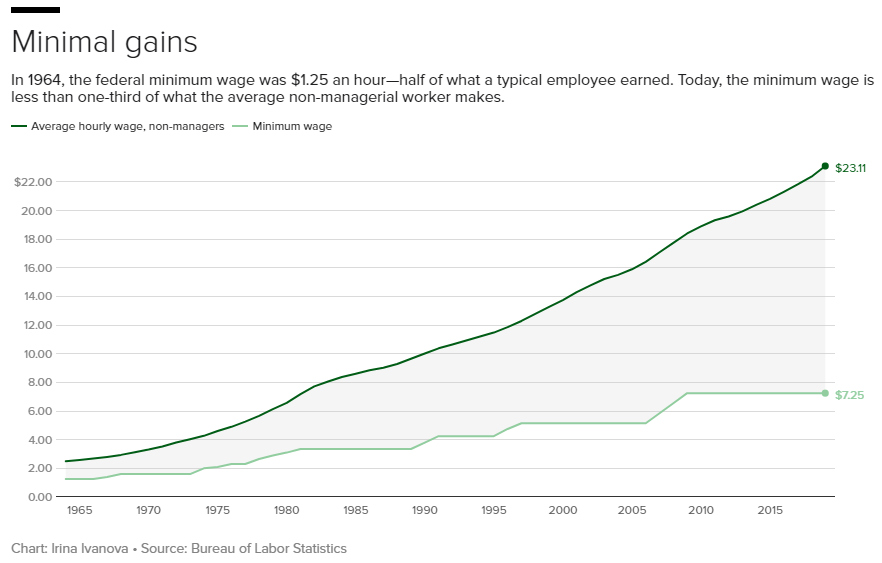 Because of inflation, the minimum wage of $7.25 is worth about $6 today, said Judy Conti, government affairs director at the National Employment Law Project, which advocates for progressive labor policies. Some states of laws that preempt local governments from boosting their wages higher than $7.25 an hour, a June NELP report noted.

Living at or slightly above the minimum wage “is a really hard life,” she noted. “In the 21 states where there’s been no minimum wage increase, workers are falling farther and farther behind.”

It’s not only hard on low-wage workers but also hurts the economy, Conti added. “We are a consumer-driven economy, and when people don’t have any money to buy food, or to go out for even an inexpensive meal or buy new clothes, that hampers a community,” she said.

Despite the lack of movement at the federal level, more than two dozen states and municipalities across the country have changed their laws to provide a higher baseline wage. Among the highest are states on the West and East coasts, such as Washington and Massachusetts, where the current minimum wage stands at $12 an hour.

Many of those successes stem from the efforts of the Fight for $15 movement, a campaign comprising labor activists and workers who’ve sought to build support for a $15-an-hour minimum wage. When it started in 2012, the group’s goal was viewed as wildly out of reach, but more lawmakers and corporations — including Amazon — have pledged support.

Public support for a hike

Critics argue that boosting the minimum wage will lead to job losses and higher costs for consumers, but that’s not borne out by states that have increased their minimum wages, Conti noted. For instance, the unemployment rate in Massachusetts has steadily declined in 2019, dipping to 2.9% in April, despite the state’s minimum wage increase to $12 from $11 an hour in January.

Most Americans support a higher minimum wage. A Hill-HarrisX poll in January found 55% of registered voters back a baseline wage of $15 an hour, while another 27% said they would like to see it increased, but by a lesser amount.

“Minimum wage just needs to go up, period,” said Blalock, the McDonald’s worker. “People are working too hard. The world is growing, so people need to grow, and they need money to grow.”