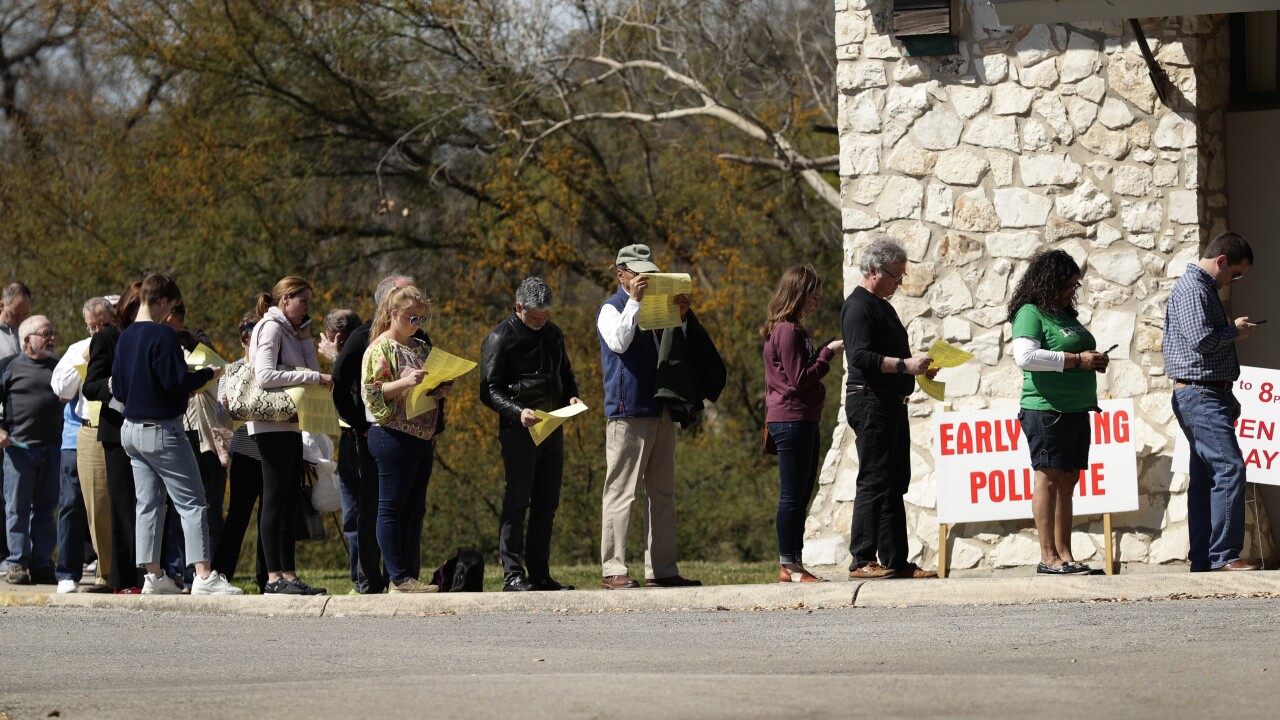 Voters in Dallas and Houston and on college campuses late Tuesday evening reported remaining in line for more than two hours — with some still waiting behind dozens of voters ahead of them. The long lines stretched out of elementary schools, through public libraries and wrapped around the LBJ Student Center at Texas State University.

That’s where Nichole Black, a senior studying management and journalism, jumped into line at 6:30 pm after getting out of class and remained there three hours later.

“I believe that every vote matters, and I want to do my part,” Black said of her motivation to wait in line. “I would also regret it if I didn't cast my vote in this primary. I think there's a real chance Texas could turn blue this presidential election, and I like the idea of being a part of history.”

Leading up to election day, county election officials and political observers speculated about a jump in turnout on Tuesday, particularly as the Democratic presidential primary narrowed following the Nevada caucus and the South Carolina primary.

But the evening lines proved unprecedented in recent history. And voters waiting it out said few of their neighbors in line were leaving before casting their ballots. At Texas State, volunteers from MOVE Texas, a nonprofit that encourages young voter turnout, walked around handing out pizza and water bottles to voters waiting their turn.

Nearly an hour and half after polls closed, voters waiting in line in Dallas and Houston reported two-hour wait times at several polling locations.

At 9 p.m., local hospital worker Mackenzie Maupin was still behind 40 people at the Baker Ripley House near downtown Houston. Maupin, who was waiting to cast a vote for U.S. Sen. Bernie Sanders of Vermont, had tried voting before work but ran into a long line then. She turned to Ripley House, which is closer to her home, after work only to face a long wait.

“It just kept going and going all around the building,” Maupin said. “I’ve never seen lines like this.”

In Harris County, local reports indicated county officials had sent additional voting machines to help run voters through the line at polling places where hundreds of voters were queuing up just before polls closed. But at 9:25 p.m. the line to vote still stretched out of a library at Texas Southern University that was serving as a voting site.

In midtown Houston, biomedical researcher Cory Massey started his walk home from Trinity Episcopal Church at 9:40 p.m. after waiting three hours to cast a ballot. A regular voter, work had kept him from voting early for his presidential pick, U.S. Sen. Elizabeth Warren of Massachusetts, so he stuck it out in line, armed with a granola bar and a water bottle.

Voting moved slowly at the church with just eight voting machines set up for those voting in the Democratic primary, but people stuck it out, Massey said. One voter even brought her own folding chair. Massey was left to watch for updates on his phone as other states were called for other presidential candidates. But he persisted in line.

“[Warren is] obviously not having a great night,” Massey said. “Regardless of where she finishes, I wanted to register my support.”

The Texas Tribune is a nonprofit, nonpartisan media organization that informs Texans — and engages with them — about public policy, politics, government and statewide issues.

This article originally appeared in The Texas Tribune at https://www.texastribune.org/2020/03/03/texas-voting-lines-extend-hours-past-polls-closing-super-tuesday/ .

The Texas Tribune is proud to celebrate 10 years of exceptional journalism for an exceptional state. Explore the next 10 years with us.