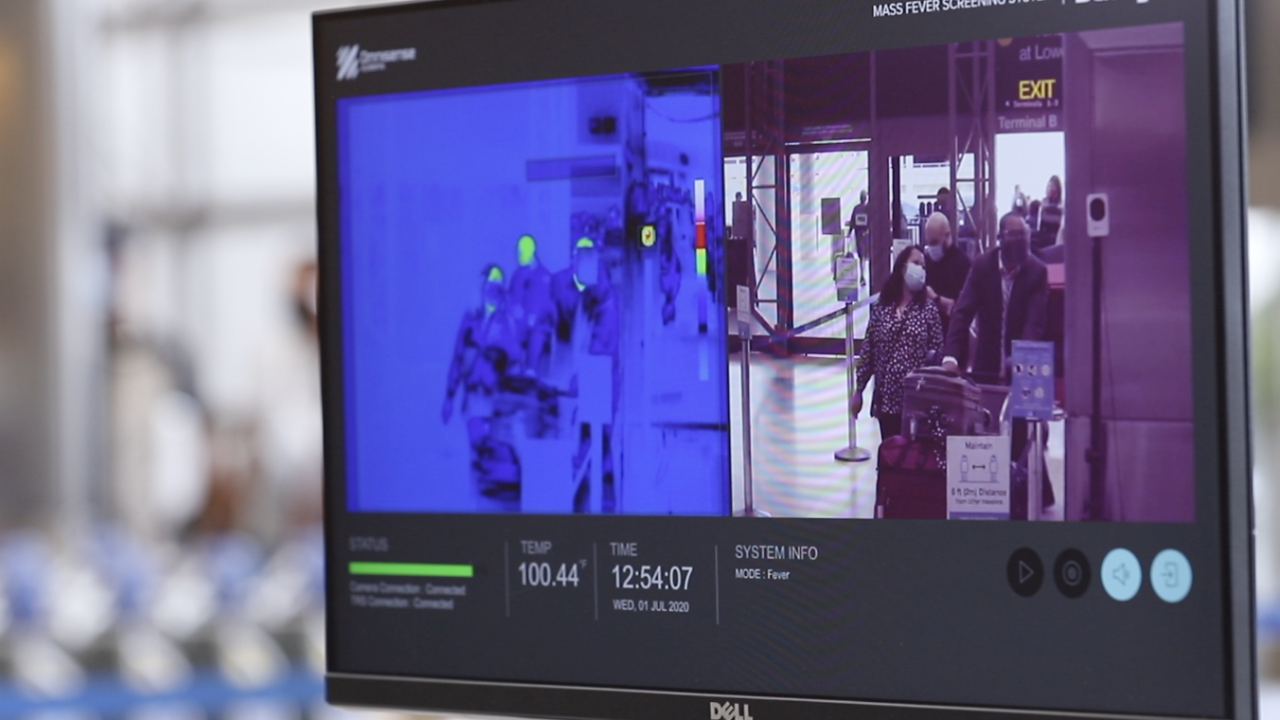 Airports are finding new ways to make traveling safe for passengers during the COVID-19 pandemic. From mask requirements to high-tech cleaning solutions and physical distancing campaigns, they want travelers to feel safe the next time they fly.

Los Angeles International Airport (LAX) is testing technology that could detect the virus long before a person boards their plane. They're running a 12-week pilot program with three thermal imaging cameras aimed at detecting elevated temperatures in passengers.

Justin Erbacci is the CEO of Los Angeles World Airport (LAWA), the governing body for LAX and Van Nuys Airports. He says LAX is the first airport to test this kind of technology at a terminal entrance.

"Certainly, as we ramp up, we have to have a process that allows passengers just to flow in," said Erbacci.

Erbacci says the aviation industry has never experienced a crisis of this magnitude.

"The closest that I experienced was 9/11, of course. And that was a terrible, terrible time. But it was a much shorter period, and the impacts were not as severe. Now, we are in a situation where the impacts are significantly greater and the duration is much longer," said Erbacci.

Medical staff monitors the thermal imaging cameras, looking for passengers with a fever of 100.4 or higher.

If an elevated temperature is detected, the passenger is asked to take a voluntary second screening with a thermometer, to validate the accuracy of the thermal cameras. If a passenger is confirmed to have a fever, they're given information about the risk but are not turned away. However, they could face another screening by their airline, which has the final say on whether they fly.

"Everyone is a bit scared, so I think they'd rather take precautions than take the chance of flying," said Guillen.

Only deployed for a week, the screenings have not yet detected anyone with a fever, but there have been a few false positives. The airport is hoping more time and data will provide a clearer picture of the camera's accuracy.

Critics of the technology say even if it's accurate, it can't spot asymptomatic passengers. And some people who show other symptoms never get a fever at all.

"These temperature checks are not meant to be the single solution that it is going to make everybody safe. It's just one layer of protection, in addition to many others," said Erbacci.

The cameras being tested at LAX are on loan at no charge, but outfitting the entire airport with them would cost in the millions; it's an investment LAX hopes the government will help fund.

Apart from giving every passenger a COVID test, Erbacci says it's the best way to detect the virus. But to be truly effective, he says it must be done nationwide to ensure arriving passengers have also been screened.

"If we can remove, even if it's only one-third or two-thirds of the people that actually have the virus, you're still stopping those people from coming in," said Erbacci.