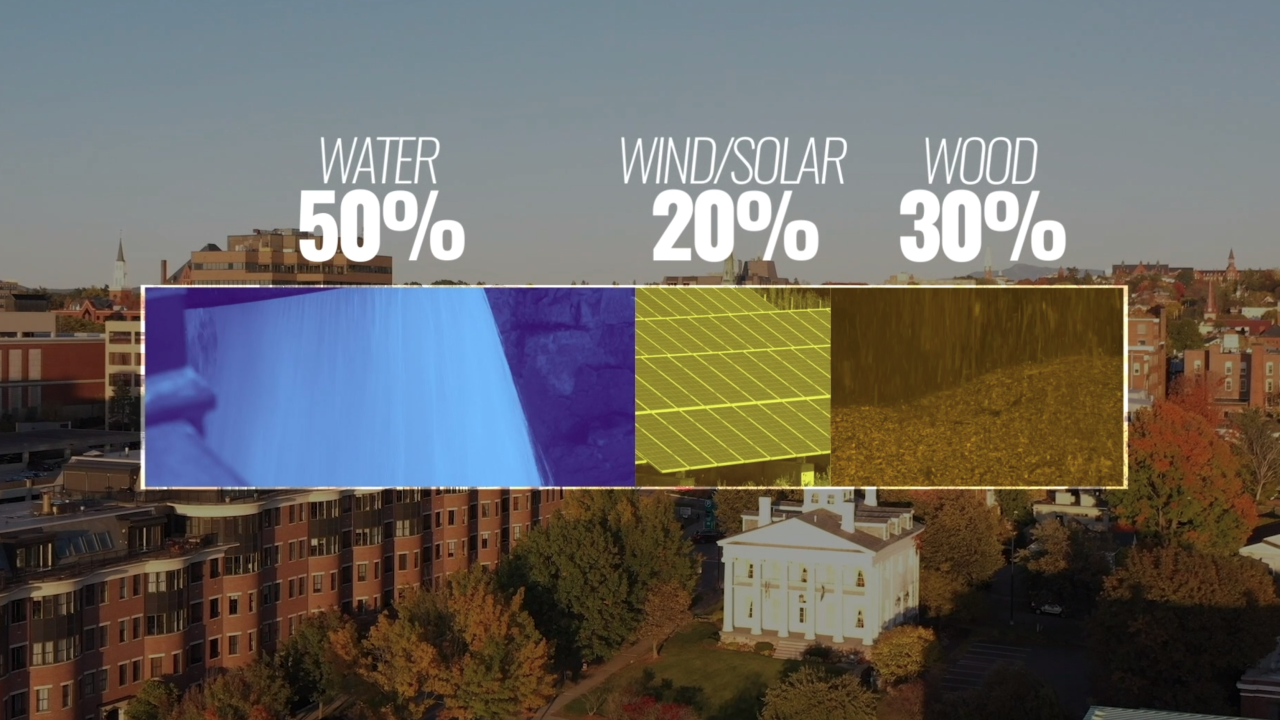 BURLINGTON, Vt. – Almost every morning for the last 35 years, a 21-car-train pulls into Burlington, Vermont, with roughly 1,500 tons of wood chips that help power the city.

Wood burning represents 30% of Burlington’s power grid, and 20% comes from solar panels and wind turbines. In 2014, when Burlington opened a hydro plant, that took over the remaining 50% of the city’s power grid and marked a historic moment – Burlington was now the first city in the U.S. to run 100% on renewable energy.

“We had our challenges at the beginning,” said David MacDonnell. “There were a lot of growing pains that we went through.”

MacDonnell knows firsthand about the path to the city’s energy milestone. He moved to Burlington in 1983 and began working for the city’s electric company, Burlington Electric Department, in 1984.

MacDonnell started as an operator at B.E.D.’s McNeil Generating Station.

“When I came, the plant was still in construction,” said MacDonnell.

At McNeil’s, at that time, Burlington Electric was just starting to experiment with wood as a possible energy source.

“It was very groundbreaking stuff at the time,” MacDonnell added.

The idea stemmed from the company looking for a more cost-effective energy source, and wood proved to be that. But over the years, the company and the community realized there were added benefits.

“The fuel budget last year was $10 million and if you think about it, we get our fuel with in a 60-mile radius of this plant. We keep a lot of money local for the community. You know the mom and pop stores, loggers, and truckers. That really supports the whole area,” MacDonnell explained.

With wood as the first renewable energy source, Burlington has also been less affected by the volatile fossil fuel industry so customer rates have been stable for more than a decade.

“Burlington Electric has successful achieved the 100% renewable energy goal without raising rates for over a decade now, so we prove it is possible to maintain rates,” said Paul Pikna, a senior generation engineer at Burlington Electric. “One could even argue, if you count inflation, we’ve decreased rates over the decade.”

But perhaps the biggest benefit in the successful application of wood as an energy source, is that it started the energy revolution in Burlington and now, in an era of concern about climate change, many point to Burlington’s energy grid as a model for other cities to consider.

“It’s very satisfying for me to know that I worked at a place for my whole career that really amounted to something that I consider a very positive for Vermont, the country, the world,” said MacDonnell.

After three decades with Burlington electric and helping it pave the way for renewable energy, MacDonnell is preparing to retire. He leaves feeling like he made more than money in his career, he made a difference.

“You have a sense of pride knowing that you are doing something that is a difference. I have kids and grandkids and we want to make sure we leave this planet in good shape for them.”

Burlington hit the historic milestone running 100% on renewable energy five years ago, and now at least four other cities have hit that milestone too. Those cities are Aspen, Colorado; Greensburg, Kansas; Kodiak, Alaska; and Rock Port, Missouri. Within the next decade, a dozen states are hoping to get there, states like Minnesota, Massachusetts, and even California.

However, while other cities and states are trying to catch up to Burlington, it’s moving forward with the next step that is a more ambitious energy goal. Burlington wants to be the first net zero energy city in the country. Essentially, the city wants the total amount of energy it consumes to be equal to the total amount of renewable energy it creates.

“About a month ago we rolled out a roadmap to go from where we are today to net zero across the thermal ground transportation electric sectors by 2030,” said Burlington’s Mayor Miro Weinberger. “The exciting thing about the roadmap is that we can get there with technology that is available today and are largely cost effective today.”

The move forward, for Burlington, is not about energy bragging rights, but about data suggesting this move is critical.

“All the climate models suggest we need to make substantial progress by 2030 and much more dramatic progress by 2050,” added Weinberger.