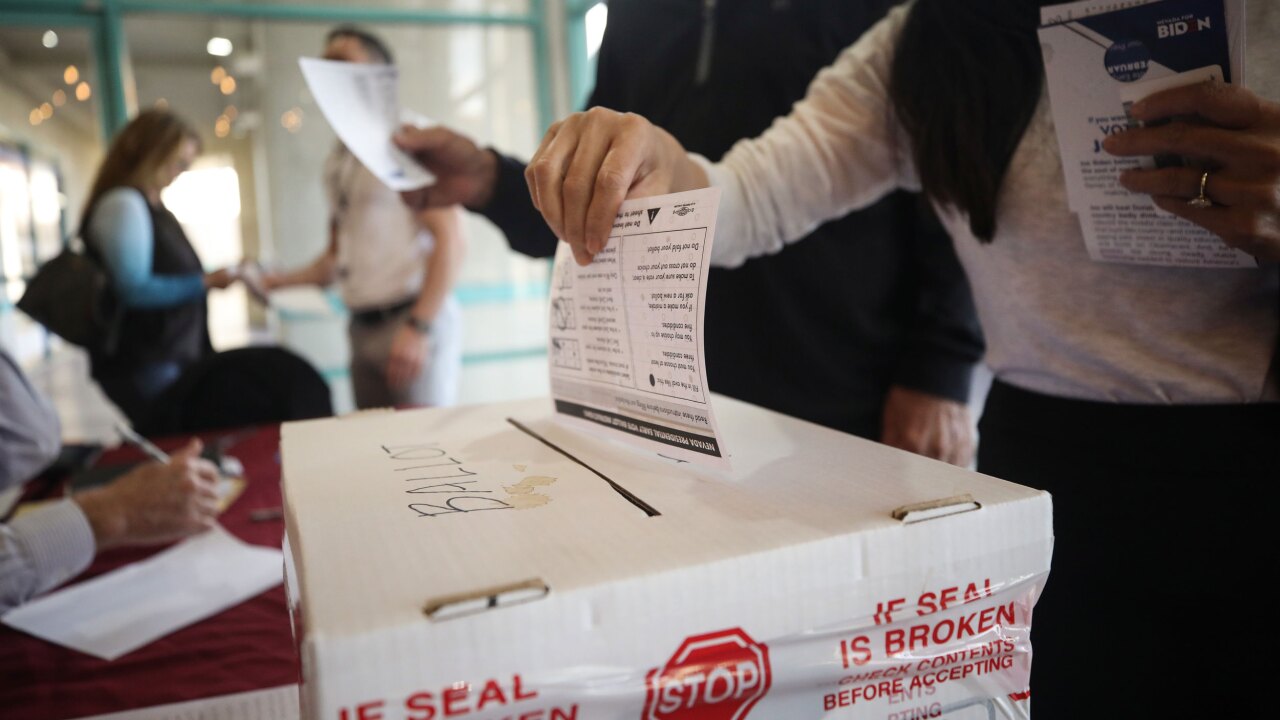 Initial results in Nevada show Vermont Sen. Bernie Sanders has taken the early lead among Democrats in the Silver State caucuses, demonstrating how he has successfully harnessed the youth vote and now a sizable portion of the Latino vote to power his candidacy.

While polling is notoriously difficult in Nevada, Sanders and former Vice President Joe Biden have jockeyed for the lead, with Sanders rising after his team built deep organizing roots in the state -- particularly within the Latino community -- some eight months ago.

Sanders projected the confidence of a frontrunner Friday by steering his campaign toward the upcoming Super Tuesday contests of California and Texas, holding a midday rally in Santa Ana, California, Friday -- with a last stop in Las Vegas Friday night -- before moving on to events in Texas Saturday.

In his final rally Friday night, Sanders said he was hoping for "the largest voter turnout in the history of the Nevada caucus," keying off the large turnout in the four-day early voting period in Nevada where some 75,000 voters turned out to cast a ballot showing their preferences in the caucuses.

During a rally in Texas on Saturday, Sanders said that if his campaign does well in the state, "Trump is finished." He highlighted the growing diversity of his supporters as he greeted the crowd in El Paso Saturday.

Early entrance polls in Nevada showed Sanders winning Latino voters by 54%, some 40 percentage points ahead of the next candidate, former South Bend, Indiana, Mayor Pete Buttigieg. Sanders also won among white voters in the polls; Biden led among black voters in those early snapshots of the electorate.

Visit CNN's Election Center for full coverage of the 2020 race

Some wondered whether Sanders would face headwinds among the considerable number of union members in Nevada after tensions flared between the powerful Culinary Union -- which represents 66,000 hotel and casino workers -- and Sanders supporters, because of the Culinary Union's opposition to Sanders' "Medicare for All" plan. The union decided not to endorse a candidate.

The Culinary Union posted flyers throughout Las Vegas underscoring that Sanders' plan would force them to give up the excellent health care benefits they fought for. That led to a backlash among some Sanders supporters online, who criticized leaders of the Culinary Union. But thus far that disagreement over Medicare for All does not seem to be hurting Sanders.

Among Nevada voters, the overriding concern was supporting a candidate who could beat President Donald Trump. But on the issues, health care was the top concern and 63% of voters said they supported a government-run plan like the one Sanders has proposed.

Of the 43% of voters who said health care was their top issue, early entrance polls showed that 39% of those voters favored Sanders.

Massachusetts Sen. Elizabeth Warren campaigned hard this week in Nevada, seeking a last-minute surge after she led the charge against former New York Mayor Michael Bloomberg in Wednesday night's Las Vegas debate. (Bloomberg is not competing in the state).

She touted her debate performance at her Friday night rally as a final pitch to voters that she would be the toughest candidate against Trump.

"If anyone doubts whether or not I can fight (Trump) on a debate stage I think we have the video from Wednesday, I'm ready for that man," Warren said. "You all live in Las Vegas, this is the place you put down the betting line, I'm just offering you this: I think there's a 50/50 chance that Donald Trump looks at debating me and doesn't even show up. He ain't that brave," she said.

Businessman Tom Steyer has spent a cool $14.8 million in the Silver State -- far outpacing Sanders, who was a distant second in spending at nearly $2 million. And Buttigieg and Minnesota Sen. Amy Klobuchar are hoping the momentum they've built over the first two contests will continue in Nevada.

Appearing in her home state of Minnesota, which does not vote until Super Tuesday, Klobuchar was the first candidate to take the stage Saturday afternoon.

She said that she had once again exceeded expectations, a claim that did not trend with the actual results that have been reported so far.

"They're counting the votes, but as usual, I think we have exceeded expectations," Klobuchar said at her campaign headquarters in Minneapolis. "I always note that a lot of people didn't even think that I would still be standing at this point."

Earlier Saturday, Klobuchar told reporters at her caucus kickoff event inside her Las Vegas office that her campaign will "be viable no matter what."

"We're already running ads in Super Tuesday states," she said. "We're headed to South Carolina for the debate and there we go."

Biden, who delivered disappointing finishes in the first two nominating contests, told CNN in an interview on Friday that he would consider a first or second place finish in Nevada to be a win.

On Saturday, the former vice president, who seemed poised for a stronger finish than in Iowa and New Hampshire, offered his thanks to his labor supporters in Nevada. As he prepared to speak Saturday afternoon, a man in the audience yelled, "The Comeback Kid" -- a phrase coined by Bill Clinton when he finished second in New Hampshire in 1992.

"Well, you got it!" Biden yelled back.

"I don't know the final results yet, but I feel really good," said Biden, who took the stage while he was a distant second to Sanders in early results. "The press is ready to declare people dead quickly. But we're alive, we're coming back and we're going to win."

Uncertainty about the caucus process cast a shadow over the race leading up to the contest.

Democrats in the Silver State showed their enthusiasm in early voting with turnout nearing the 2016 Caucus Day turnout of 84,000 (when there was no early vote). And the party estimated that more than 50% of the early vote participants were first-time caucusgoers.

But national party leaders are striving to avoid the kind of caucus counting disaster that befell Iowa. On Saturday, a few precinct captains told CNN that they were running into busy signals when they tried to call the Nevada Democratic Party's hotline to transmit the results from their caucus sites. (Precinct chairs were also given the option to text pictures of their results to headquarters -- one of the redundancies built into the system).

In the lead up to voting, the Nevada State Democratic Party offered "round the clock" caucus trainings to show volunteers how to work the special caucus calculator that precinct chairs will use to enter results. The Democratic National Committee also sent in a team of aides this week to avoid the embarrassment that unfolded in the Hawkeye State.

After abandoning plans to use the same faulty app that was used in Iowa, the Nevada Democratic Party has also worked hard to create low-tech reporting systems to transmit results.

"No Iowa repeat," Jon Summers, a senior adviser to the Democratic Party, said during an interview with CNN Friday. "The party has been working around the clock to make sure they get everything right, to build in redundancies in the system. They've gone from what was going to be a very, very high-tech operation for the caucuses to one that's very low tech now -- that's paper-based and based on phones."

"They're going to have phone lines manned by about 200 people who will be accepting calls from the precincts when it's time for them to report the results," said Summers, the former communications director to then-Sen. Majority Leader Harry Reid.

This story has been updated with additional developments Saturday.