REXFORD – State officials say it was a hotline tip addressing serious allegations of abuse and neglect which opened an investigation of the treatment of children at a controversial Lincoln County youth ranch.

The Department of Public Health and Human Services (DPHHS) removed 27 children on Tuesday and placed them into undisclosed locations where they are undergoing trauma-informed treatment, according to DPHHS Deputy Director Laura Smith.

The Montana Department of Justice released the following statement on behalf of the Lincoln County Sheriff’s Office:

Due to allegations of egregious physical and psychological child abuse and neglect, the Lincoln County District Court ordered the that children be removed from the Ranch for Kinds pending a full investigation. Twenty seven children were safely removed without incident and are now in DPHHS custody.

The Ranch for Kids, which is located in a remote forest of northwestern Montana, has been ordered to suspend their license to operate after officials report children were being “physically hit, kicked, body slammed and spit on by staff.”

In some cases, students were forced into “excessive discipline” including 15-to-20 mile hikes on remote US Forest Service roads.

“We’re talking about roads up on the Canadian border where you got wildlife like bears and moose. You got Hotshots, who are coming down those Forest Service roads and these kids are in improper footwear and harsh conditions,” Smith added.

Investigators also say that one student was shot at with a nail gun. The state also says the children didn’t receive proper medical attention.

DPHHS received a hotline tip in June sparking the investigation into Ranch for Kids.

Smith said there was “consistent allegations across witnesses.”

“Today, the State of Montana removed 27 children due to serious allegations of egregious, chronic, and persistent child abuse and neglect of youth who reside at Ranch for Kids in Rexford, Montana, including physical and psychological abuse and assaults of children by staff. Simultaneously, the facility’s license was suspended effective immediately.  DPHHS is working to contact parents and develop plans to reunify families or help find suitable placement for these youth. The health, safety, and welfare of all children who live in Montana is paramount, and no child should have to experience what multiple sources have alleged has happened at the Ranch for Kids. We are grateful to the many agencies, including law enforcement, who ensured the safety of the kids and caseworkers during today’s removals.”

Children — ranging from ages 11 to 17 — are placed in the camp by their parents or adoptive parents. They come from a variety of different states, and even countries and are at the ranch for multiple days, or even years, according to Smith.

According to the Ranch for Kids website, they offer an “effective, compassionate treatment program for children of all ages challenged by Fetal Alcohol Spectrum Disorder (FASD) and Reactive Attachment Disorder.”

Guardians pay “tens of thousands of dollars” to send their kids to the program in hopes they’ll change, according to Montana State Senator Diane Sands (D-Missoula).

Sands was a sponsor of the bill — that went into effect on July 1 — which gave the state control to dictate conditions at programs with religious affiliations, like “Ranch for Kids.”

Sands added prior to the passing of this bill, these kids had no protection.

“They are isolated from their families or anyone else. In fact, some of the treatment for these kids is worse… we are not allowed to do things – like put convicted murderers in isolation or treat them the way we treat some of these kids,” Sands said. 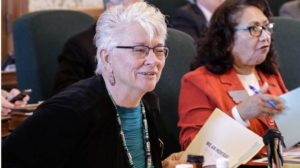 MTN News has reached out to Ranch for Kids for comment, but they have not yet answered out request.

On its website, the program says “The Ranch for Kids serves as a bridge of hope and healing for hurting families”, which offers “effective, compassionate, treatment program” for “children of all ages”, helping them to “build new habitats and healthier behaviors.”

The 27 children who have been removed from the ranch are in state custody and officials are working to contact parents and/or guardians.