Arrival of snow a good development for Western Montana

MISSOULA – A drier than average start to the winter has been taken over by waves of snowfall in recent weeks.

Heading into an El Nino winter — even a weak one — the main weather concern is the potential for below-average snowpack and the impacts that follow into the rest of the year.

A relatively dry December and early January did not alleviate those concerns, but a change to a wetter weather pattern the last few weeks has brought a more positive outlook.

“Boy, right now across most of Montana, really we’re close to normal with our snowpack, so that’s good news for water supply when we come into summer,” said Ray Nickless, a National Weather Service hydrologist in Missoula.

Over the last two weeks, the Kootenai and Bitterroot basins have seen a 6% increase in snow-water equivalent which is an impressive jump over a short period of time.

The long-range forecasts are also trending toward more of what we’ve recently seen. 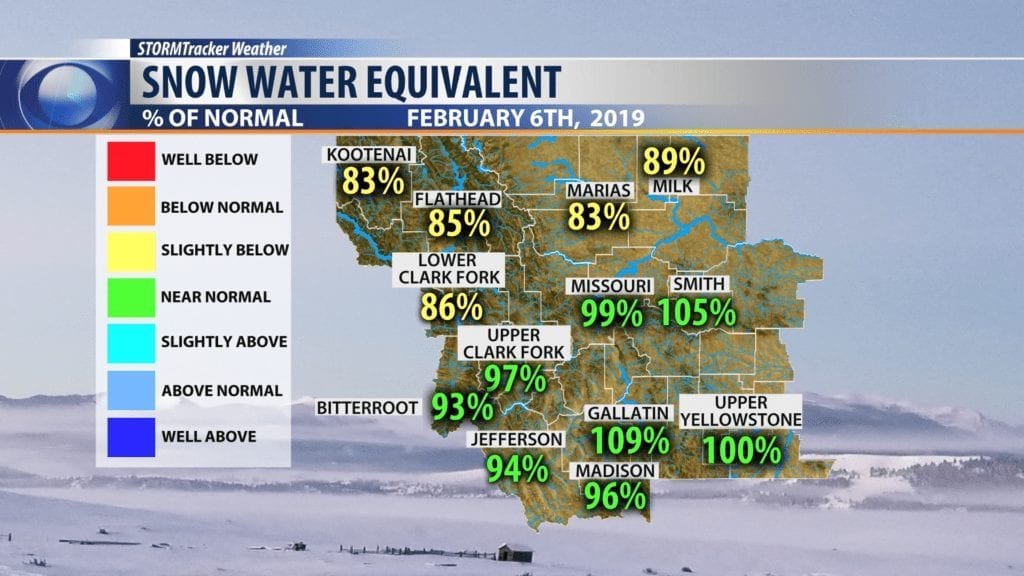 “As we go farther into February, we’re still in an active weather pattern, so we could still build up snow as we go through February and into March,” Nickless said.

Western Montana has experienced cold temperatures in addition to increased snow events which Nickless says that, while the frigid air means drier snow, it has benefits.”

“We’re still average with the water content in the snow, so that’s good, and you know, it’s been cold enough temperatures — like you said — keep the snow from experiencing any kind of real melt,” Nickless stated.

He added that at this point it’s still too early to predict how the snow will impact the possibility of spring flooding.

“We still probably need to keep an eye out for that, you know as far as the low elevation snow. We’ll see how that comes off as we go farther into the March timeframe.”

It appears the typically dry Northern Rockies El Nino winters will not play out for the winter of 2019 with our active weather expected to continue in the coming weeks.

The snow has been especially beneficial to northwest Montana, which has been lagging behind the rest of the area in precipitation since last summer.