It was a wild Thursday across the state for severe weather, especially in central and eastern Montana.

Powerful storms rolled through parts of the Treasure State — including a tornado that touched down north of Harlowton.

Garfield County Disaster and Emergency Services reports that the tornado struck just a little after 6 p.m.

We don’t know if any damage has been caused at this time. Traffic was stopped for a time while the storm moved through the area. 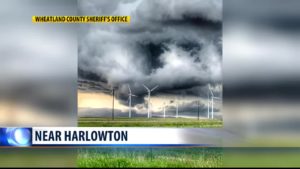 Tornado warnings were also issued for areas north of Lewistown.

Heavy rains caused some flooding causing drivers to struggle as they drove through streets covered in water.

Strong winds and quarter-sized hail were reported at the Great Falls airport, but it was torrential rain that made the biggest impact, leaving some streets impassible.

Tornado warnings were issued on Thursday afternoon, mostly for rural areas of Montana.

But it was a scary situation for nearly 40 people at Little Rockies Christan Camp near Landusky in Phillips County.

It was the first night of camp there for second and third grade students.

Camp staff say they started getting alerts while they were eating dinner — and decided to move everyone to the cellar — where they passed the time and tried to keep calm.

“We sang songs, told a Bible story. There were a few tears, but overall the kids were champs and we have a story to tell now,” Amy McClenahan.

She says they spent about an hour in the cellar adding that their reception and wi-fi is spotty at camp — but she tried to keep parents and friends in the loop through social media.

A video shot in Clancy south of Helena showed a storm hit around 2 p.m.

Heavy rain, thunder, lightning and even hail dumped on residents in the northern Bitterroot Valley as a storm rolled through Lolo and into Missoula on Thursday evening.

Even in Northwest Montana, some passing storms knocked down trees, which left hundreds of people in the dark in the Kalispell area on Thursday afternoon.