MISSOULA – Casey Blanchard, one of the victims of a mid-March shooting in Missoula, continues to recover in a Salt Lake City hospital, but he’s expected to come home to Montana in June.

“Casey continues to progress well through his treatment. He is becoming more confident in his daily activities such as being active, transferring in and out of a vehicle, and cooking. This may be a new journey for us, but we are not letting it stop us. As of now, our estimated date to return home to Montana is the beginning of June.” Leah Blanchard, Casey’s wife.

Blanchard was shot eight times including in the left arm, chest, spine, abdomen, and both legs as he exited his vehicle to check on a motorist who he thought needed assistance, according to the Blanchard family.

He has undergone 10 surgeries and was moved to rehabilitation on April 16, according to earlier reports.

Blanchard was one of four victims in a series of shootings near Missoula in mid-March. Shelley Hays died from his injuries.  Montana Highway Patrol Trooper Wade Palmer also critically injured in the shooting, returned to his Stevensville home Thursday. 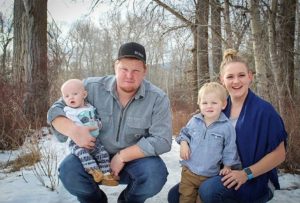