MISSOULA – Missoula County Public Schools trustees have a long day ahead of them on Thursday.

But hopefully, by the end of the day, they’ll find a replacement for retiring Superintendent Mark Thane.

The MCPS board will be considering three candidates.

Dr. Robert Watson, who’s currently Superintendent for Bozeman Public Schools. He was previously the principal at Bozeman High School before being promoted in 2012. He’s a graduate of the University of Montana.

Jan Haven is a Director of Instructional Leadership for Milwaukee Public Schools, where she oversees that district’s Central Region which includes more than 26 schools. She’s also worked with teachers education and other programs with the Wisconsin Department of Public Instruction. 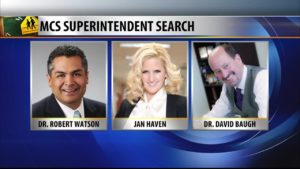 The third candidate is Dr. David Baugh, who is Superintendent of Public Schools for the Centennial School District in Warminster, Pennsylvania. He’s held that position since 2015, with previous superintendency and teaching experience in Pennsylvania and New York State.

Once the trustees have interviewed the three candidates on Thursday there “meet and greet” session at Sentinel High School starting at 4:30 p.m.

The board will meet at 8 p.m. on Thursday with plans to select the new superintendent.