MISSOULA – Departing Montana Department of Transportation Missoula District Administrator Ed Toavs is looking back at a lot of great accomplishments with a talented team during his past seven years overseeing hundreds of millions of dollars of Western Montana highway projects.

Yet at the same time, Toavs believes there are serious challenges ahead, driven by our accelerating growth.

It’s easy to see that of all projects he’s worked with at the MDT that Toavs sees the most satisfaction with the Kalispell Bypass. He even prepared an exhaustive study showing the economic growth it spurred in the Flathead.

It was stressful. It was busy. But it was very rewarding to see a new road built in this day and age. And then that opens the door,” Toavs said. “You have a ‘half pass’ is what we jokingly called it. We have to complete it. We just do.”

As he prepares to go into the private sector with Jacobs Engineering, Toavs sees lots of highway work still needed, even with all the bridges and capacity finished, or under construction.

Reserve Street is an example of a problem that’s difficult to solve and Toavs believes eventually completing Russell Street to Interstate 90 could help.

“I think that’s the answer to Reserve Street. We don’t really have a good capacity answer for Reserve Street but we do have that,” Toavs told MTN News. “And that’s probably the answer.”

Toavs says busy places like Russell Street in Missoula aren’t the only ones feeling the impacts from Western Montana’s rapid growth.

He says even some of the outlying communities — places like Whitefish — are starting to see serious impacts that will need to be addressed in the coming years.

“I think of all of the projects that I see, that is probably the most daunting. Because the solutions are very minimal, as far as what can be afforded,” Toavs explained.

There’s been some initial talk of a one-way couplet, but Toavs says it will take community agreement to improve capacity, and safety in downtown Whitefish. 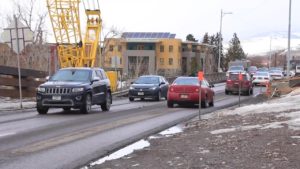 “Solutions are challenging. But that one as much as any project is going to take cooperative, collaborative efforts in the future by all agencies and groups involved to come up with something that will improve that area,” Toavs said.

Elsewhere, he says the state has much to do on the Evaro to Polson corridor of US Highway 93 North.

“You know, Post Creek Hill has some engineering challenges. The Ronan projects, we’re trying to work through those. Those are challenging projects,” Toavs said.

“And ultimately the Ninepipes area has a lot of sensitive area and environmental concerns that will be pretty tricky to deal with in the future,” he added.

But based on what he’s learned in the Missoula post, Toavs says collaboration and innovative thinking are the path forward.

“Look at the advocacy that you can make on a state, and even a national level, to say, this infrastructure is important. We have some good reason for it so it should qualify for some funds.”