Ex-Ranch for Kids student speaks out, executive director responds to abuse allegations
Posted at 7:49 AM, Aug 01, 2019

REXFORD – Imagine being locked in a closet for two days with no food or water, and only a bucket — that’s what some people say were the conditions at the Ranch for Kids in Rexford.

More than 20 children were recently removed from the ranch, and now several former students are coming forward with their stories.

Allegations of severe abuse had escalated in both frequency and severity in recent months, according to several accounts.

However, life wasn’t always that way for Springer. She was adopted at age 10 from Russia and struggled to get along with her new adoptive family.

“I had a really hard time getting along with my family. I caused a lot of pain for my family and my mom and dad didn’t know what else to do. So they told me they were going to send me away to this horse ranch in Montana,” explained Springer.

“We specifically work with adoptees, mostly international adoptees, who have fetal alcohol spectrum disorder and attachment disorder and that combination,” said Sutley.

Springer told MTN News that at first the Ranch for Kids was great for her and that the staff was incredibly welcoming and friendly.

“The moment that I got there the staff were super friendly, the staff that I had, she was amazing,” said Springer.

However, things quickly took a dark turn, according to Springer. She recalled that if she was assigned to work with Sutley, she’d spend eight-to-nine hours a day digging holes with other students — without shoes, water or food.

She vividly recalled one instance where she thought the Ranch’s discipline went too far.

“And at the end of the schoolhouse there’s a closet so they stuck this five-year-old boy for two days with no food or water and just a bucket,” she added. 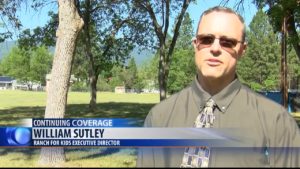 While Sutley is not a licensed therapist, he explained that the methods at the Ranch for Kids provides structure and discipline. He also responded to the abuse allegations being made.

“Most of the individuals who are the source of that information are probably suffering from some form of mental illness,” Sutley said of those making accusations against The Ranch for Kids. “We need to really look at the evidence, and not just the unsubstantiated claims.”

The Ranch for Kids co-founder Joice Sterkel — who has a nursing background and used to run an adoption agency — echoed similar sentiments to Sutley.

“Anybody that knows me, knows my family, knows my children would understand that we would never do something like this,” said Sterkel.

Sutley told MTN News that the ranch is still operating, even without funding or children — and he hopes to have his license renewed soon. He added that all he wants is his fair day in court and to have evidence presented from both sides.

Local law enforcement and the Montana Department of Public Health and Human Services removed 27 children on July 23 and report they are currently in safe and secure locations.